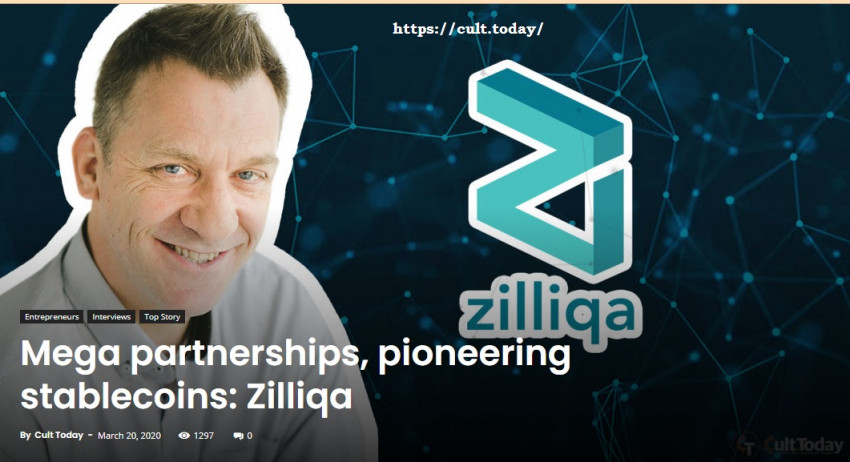 In 2020, Zilliqa is ramping up its announcements, collaborations, and product releases. In the previous three months, Zilliqa has made significant progress towards its goal of becoming a leading blockchain project. StraitsX, a stablecoin pilot tied 1:1 to the Singapore dollar and the Indonesian rupiah, was the first to go live. Then, in collaboration with global advertising technology business Moving Walls, Aqilliz launched the world's first blockchain-powered digital out-of-home campaign for food delivery giant foodpanda. Zilliqa has also announced partnerships with Hummingbot and Switcheo, in addition to these two.

What about Zilliqa intrigues you the most?

After researching and experiencing a number of blockchains during my studies over the course of five years, I realised that Zilliqa was well ahead of most of the blockchains claiming to be game-changing. Given that Zilliqa was real, that it was processing millions of transactions, and that it was actively following through on its white paper. I had put everything on the line.

StraitsX was just launched by Zilliqa in collaboration with Southeast Asian fintech payments company Xfers. Could you shed some additional insight on this collaboration? Can you also tell us what problem StraitsX might solve?

We first stated that we would be allowing blockchain-powered payments to Xfers' network of over 500,000 enterprise clients and users across Indonesia and Singapore in June 2019. Since then, our collaboration has blossomed into StraitsX, a stablecoin pilot comprised of XSGD and XIDR, both of which are tied 1:1 to the Singapore dollar and the Indonesian rupiah, respectively. Despite the fact that a huge number of stablecoin initiatives are now pegged to the US dollar, StraitsX aims to give an alternative to the Southeast Asian region's increasing community of token holders and dealers.

‘STRAITSX IS A BLOCKCHAIN-BASED RESPONSE TO OPEN FINANCE'S UNDERLYING ETHOS.'

StraitsX is a blockchain-powered response to the underlying ethos of open finance, which looks to pioneer equal access and opportunity for those underserved by banks, as well as greater transparency between legacy infrastructures and fintech projects, spurred on by a shared vision to enable a more open, transparent financial ecosystem in the region. While stablecoins are frequently used to reduce volatility on cryptocurrency exchanges, XSGD has an immediate real-world application. These stablecoins can be used by e-commerce merchants and retailers looking for better transparency and liquidity, thanks to Xfers' thriving network of enterprises. Meanwhile, consumers across the region would benefit from low-cost cash transfers that are available 24 hours a day, seven days a week and can be completed seamlessly and inexpensively without the necessity of traditional financial intermediaries.

What is the size of the Zilliqa team, and what are their current priorities?

Zilliqa now has a staff of 24 people split across two continents, with me as the newest addition. Given the team's focus on security, our Platform team is working on it constantly—as we grow, the difficulties we'll face and the needs of our partners will change, and we'll need to make sure our infrastructure keeps up.  Beyond that, our newly formed Usability team is focusing on core areas of user experience and developer resources to ensure that all of our users have what they need, whether they're looking to build Dapps on the network, join as a node, or are token holders who want to learn more about what we do and how we do it. The Growth team, on the other hand, is concentrating on advancing our OpFi-related projects around the region while also interacting with talented teams through our ZILHive Grants. It's an ongoing process for us at Marcom—we handle everything from internal communications to exterior contacts with content providers like yourself, as well as our community.

INTRODUCING BLOCKCHAIN-ENABLED MARKETING SOLUTIONS ON AN ENTERPRISE LEVEL, AQILLIZ HAS MADE A LOT OF PROGRESS.

Hummingbot was just released a few weeks ago. Who is this intended for?

Our recent collaboration with Hummingbot allowed traders and members of the community to create their own algorithmic trading bot. This helps to increase ZIL token liquidity on participating exchanges by maintaining both buy and sell orders on the order book. While Hummingbot is intended at our existing community of traders, it also serves as an easy introduction to individuals who are new to trading, incentivizing them to engage by allowing them to earn passive income by providing liquidity to their prefered tokens.

For their marketing needs, the majority of businesses have moved to centralised platforms. The industry has been affected as a result of the structural change in revenue patterns for publishers. For more than a decade, this industry has been in a state of existential crisis. How will Zilliqa be of assistance?

While this is true, we must not overlook the reality that the rise of social media platforms like Facebook, Instagram, and YouTube has facilitated the proliferation of independent content creators, thereby democratising the marketing landscape for businesses and creatives. This, of course, predates decentralised alternatives, and there are a slew of projects in that field doing interesting things. In terms of Zilliqa, our sister firm Aqilliz is making significant progress in implementing enterprise-level blockchain-enabled marketing solutions.

Small publishers and Youtubers are completely dependant on Facebook and Youtube, and they risk being blocked or losing their following as a result. This is something we see on a regular basis across platforms. What are your thoughts on censoring by huge social media sites, and how do you think we should fight back?

Mainstream social networks are a two-edged sword: although they've given companies and individuals more autonomy over their marketing efforts, freeing them from the shackles of agencies and providers, they've also come at a price. Unfortunately, in order to reach the largest number of viewers or listeners, you will almost always need to use the most commonly used platforms, such as Facebook or YouTube. It's impossible to dispute that these platforms have become an important part of our social fabric as a means of communication, knowledge sharing, and entertainment. Because huge corporations are frequently part of publicly traded organisations, the rules they must follow are different.

SWITCHEO WILL DEMOCRATISE AND GROW TRADING FOR ZIL ACROSS ADDITIONAL PAIRS, PROMOTING STABLECOIN USE.

You've spent a lot of time in the mobile advertising industry. Is there any synergy you're bringing to this sector for Zilliqa and other developers?

Since its inception, Zilliqa has prioritised advertising, with our collaboration with premier global media agency Mindshare coming to fruition in November 2017. This evolved into Project Proton, a blockchain experiment that attempted to address some of the industry's recurrent difficulties, culminating in a groundbreaking test campaign with PepsiCo in May 2019. All advertising-related use cases have been carried out by Aqilliz from its inception. We power all of Aqilliz's projects as their sole blockchain supplier, clearly showing the Zilliqa network's potential for enterprise-grade advertising use cases.

I'm excited by the applicability of blockchain technology to the mobile advertising industry in particular, and I know that firms like ours will be looking to technology like ours to solve some serious fraud and payment challenges.

HUMMINGBOT GIVES THOSE NEW TO TRADING AN EASY INTRODUCTION, INCENTIVIZING THEM TO PARTICIPATE BY PROVIDING PASSIVE INCOME BY PROVIDING LIQUIDITY TO THEIR CHOICE TOKENS.

Do you have any other upcoming items or plans that you can tell our readers about?

We will undoubtedly make announcements; it is in our DNA! We published an enhancement proposal to introduce staking to the network, which I know has been a long time coming—we're really eager for comments from the community as well as developers on this, so please have a look! In addition, the Aqilliz team recently announced a partnership with Moving Walls, a worldwide advertising technology provider, to develop the world's first blockchain-powered digital-out-of-home (DOOH) campaign for mobile food delivery giant FoodPanda.  Another recent announcement concerned our new DEX collaboration with Switcheo, which will democratise and expand ZIL trading across multiple pairs, as well as increase stablecoin adoption. You'll pardon us for not being upfront about upcoming items or plans; nonetheless, there will undoubtedly be several updates from Zillacracy and ZILHive. The marketing machine doesn't stop working!

CULT is Crypto Urban Libertarian Thought. Thousands of projects around the world are emerging to take back data from big corporates, bank the world's poor and redefine an unjust global financial ecosystem. At CULT, we will keep you in touch with the vision and visionaries behind this social movement.

Directives of Driving in Rain - All Sydney Tow Truck

Dealing with Locked Out Keys situation - On Time Sydney...

HOW TO CHOOSE THE BEST SIDE OF THE ROAD ASSISTANCE...

3 Things You Need to Know About Packaging Services